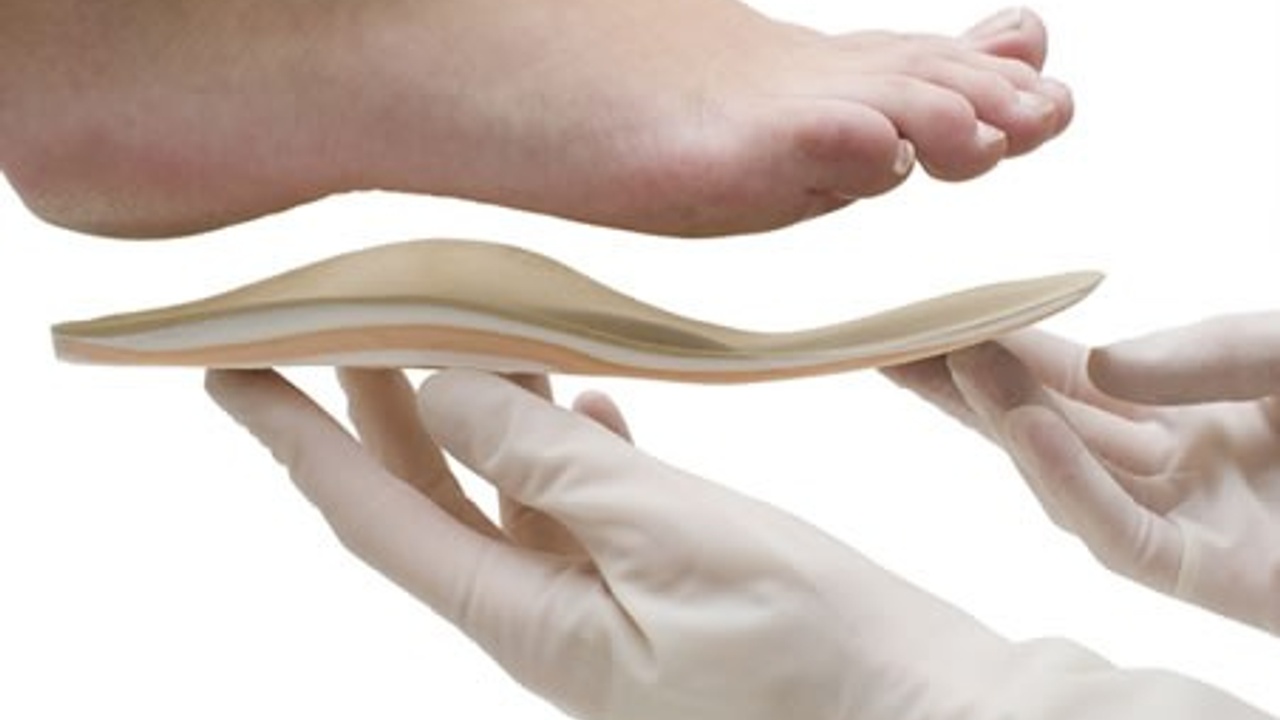 Should I be wearing foot orthotics?
Will they help my joint pain?

You may have asked yourself these questions. And to be honest, I did. After my third knee surgery, I pursued orthotics with my orthopedic surgeon. Although he didn’t seem convinced they would help, he did write me a prescription, and I soon had custom inserts in my shoes.

Did they help? Actually, I’m not sure. Afterward, I didn’t have any more knee surgeries, so that was nice. However, I did need a hip arthroscope two years later, so . . .

Pete Egoscue, founder of the Egoscue Method®, has a strong opinion about orthotics: “Inserts may make the feet seem more comfortable, but they do nothing about the continued stress in the ankles, knees and hips.” This was probably true for me. All I did was put orthotics in my shoes and hope for improvement. Instead, I should have addressed the underlying postural misalignments and functional issues that had caused the breakdown in my knee in the first place.

Let me explain. I had additional imbalances throughout my body, such as an over exaggerated spinal curve, uneven back muscle tension, excessive forward pelvic tilt and twisting, and many other issues. Because I didn't treat them, they soon affected my hip. So, clearly, slipping a piece of foam under my foot couldn’t possibly control my asymmetries and distorted movement patterns all by itself. Instead, I should have focused on retraining my muscles, nerves, connective tissue and brain. Not surprisingly, the orthotics didn’t help me avoid further joint deterioration. Nor did they prevent another surgery.

When I started practicing the Egoscue Method® for pain relief after my hip surgery, I ditched my orthotics. Why not? They didn’t seem to be helping anyway. If you think about it, the Egoscue® philosophy is to build strength and stability of the foot position from the inside out. So, my Egoscue therapist advised me not to rely on an external device (orthotic) to improve my position and function. Rather, I needed to retrain the chain of muscles and joints that were causing the foot to be in a poor position. Additionally, they instructed me to do my corrective posture exercises with minimal foot support. In other words, I had to do the exercises barefoot. Nicely, I made good progress with this approach. But unfortunately, my recovery eventually plateaued.

Last year, I began attending Postural Restoration Institute (PRI)® courses and working with a physical therapist trained in the technique. At the first two courses I attended, the instructors commented about my minimal shoes, noting that they were not appropriate for me. My therapist concurred. So, I soon bought more supportive running shoes. These became my daily uniform. I added arch inserts, and eventually I had custom PRI orthotics made. From orthotics, to toe shoes and barefoot running, and back to orthotics--I’ve come full circle.

How our feet contact the ground creates a chain reaction throughout the body from the foot to the head. Gary Gray, PT and founder of Applied Functional Science® first introduced this concept. Orthotics, therefore, not only treat symptoms of the foot and lower leg but also treat pains all the way up the body to the neck and jaw.

In Gray’s words, “The whole reason to create an environment such as an orthotic for the foot is to enhance the body. [...] Orthotic is a tweak, that’s all it is. It’s a way to change the angle of the ground and change the reaction of the body via the foot via the knee via the hip so the body can actually be more functional.” In other words, a foot orthotic changes the way that forces are directed into the joints above. This can reduce strain and pain throughout the body. However, it only works if the orthotic is made correctly and if proprioception, which is your ability to sense how your foot is contacting the ground, improves at the same time.

What’s different about my PRI orthotic and why should it work any better than my previous one?

First of all, my PRI orthotic was made with my foot in a neutral, non-weight bearing position. This means my ankle bones--calcaneus and talus--which make up the subtalar joint, along with the surrounding muscles and tendons, were correctly aligned. Please refer to the Wikipedia image below. 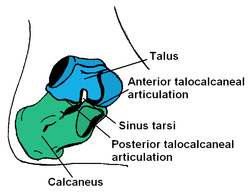 The subtalar joint initiates rotational movement of the foot. As you might know, most people call this movement pronation (foot rolling inward) and supination (foot rolling outward). Because the food was in a neutral position when the PRI orthotic was created, the foot has less excessive rotation. This is important because rotation around the subtalar joint creates instability in the foot. An orthotic stabilizes the foot, which depends on the muscular compression across the subtalar joint. This stabilizing compression can only be generated when the bones and soft tissues align correctly.

When my first orthotic was made my foot was not in a neutral position. I was standing when my previous impressions were taken. Standing on my foot with the influence of gravity and body weight allowed my foot to overpronate and become unstable. Hence, the orthotic, which had been made from a mold in which my foot was overpronated, would not stabilize my foot and improve the function in my joints above. One of the main goals of PRI orthotics is to stop overpronation early, not allowing the foot to roll excessively inward when the foot contacts the ground in walking or running.

When the calcaneus and talus bones are out of position with each other, this compromises the surrounding muscles. Lacking a good position, the muscles cannot compress down and stabilize the subtalar joint between the foot bones. This leaves it unstable. Foot instability creates twisting in the lower extremity. As a result, the foot, ankle and knee are no longer in alignment and are no longer going in the same direction. To remedy this, my PRI orthotic holds my foot bones in alignment so the lower leg works as an integrated unit. The position of the lower extremity influences muscle activation patterns during walking (gait).

Coffin puts it this way: “The central nervous system recruits muscles during the gait cycle in a learned pattern. This pattern is dependent upon the function of the lower extremity, and the relative position of the bony structures. The recruitment of muscles will be different in a foot that is excessively pronated throughout the gait cycle than in a foot that is more appropriately aligned.” In other words, when the foot is appropriately aligned, the central nervous system will respond accordingly. That’s the goal!

Here's an example. When my arch collapses due to overpronation and I don’t sense contact of my big toe to the ground when I take a step, I struggle to engage my big, powerful gluteal and hamstring muscles. So, I overuse my calves. However, when I wear my PRI orthotics, they support my arch. Then, I am able to contact my big toe without overpronating. As a result, I can activate my leg and butt muscles in the appropriate pattern. Yeah - nervous system!

While wearing my minimalist shoes, I had no control over the alignment of my foot bones. So, I overpronated with each step. I could not find and feel the correct muscles to use for good gait mechanics. Therefore, I developed strong compensations in my movements. This clearly took a toll on my knee and hip. My new PRI orthotics, though, along with targeted exercises and enhanced sensory awareness of my foot position, have allowed me to become reacquainted with muscles and function long forgotten. The orthotics enabled this progression which wasn’t possible with my prior unsupportive shoes and foot position.

Properly constructed orthotics can be helpful to realign the foot and improve function. Foot orthotics impact the soft tissue and joints in the chain above. Orthotics are most effective when used in combination with corrective exercises that retrain muscle mechanics. Although an orthotic can improve foot position, you still need to pay attention to how the foot is contacting the orthotic in the shoe.

I had been wearing my inserts for several months before it became apparent that I struggled with some exercises because of my lack of awareness about how my foot was being weighted. I had assumed the orthotic would fix everything and I could disregard my foot mechanics. Wrong! I still needed to be able to feel my heel, big toe and arch (PRI reference centers) while wearing the orthotic. As I found out, I could still cheat and fail to engage the correct muscle patterns by not appropriately feeling important reference centers in my feet during my exercises.

Are my PRI orthotics helping? Yes! I have overcome previous plateaus. I continue to feel stronger. And, I move with less pain and greater function. Are PRI orthotics or any type of shoe inserts right for you? Perhaps. Every foot is unique. If you have been suffering with long-term chronic pain and haven’t addressed your foot mechanics, you should consider it. Work with your local medical provider or find a PRI provider in your area.

Take care of your feet to enjoy pain free activity for years to come!